I’ve been lifting for around a year now (9 months to be exact), and to say that there has been a change in the way I feel and think about training is a huge understatement.

When I first started out, I always thought that the more volume you do, you were going to get bigger and stronger quicker.  10 sets of curls instead of 3?  My guns would become so big and noticeable that the cops would have to ask me to hide them.  Bench press 5 times a week?  I’ll get that gorilla chest in no time.  Half squat 20 reps every workout?  I’ll get that big butt in no time.

I followed this train of thought for 3 months total, and little results showed, if any.  Guns weren’t popping, chest and butt was flat.  I was like, “Dam, what the heck is wrong with me?  Why am I not gaining any muscle?”

I didn’t find out the answer to my question til I came across a Reddit post that was titled “Stuff Newbies Do.”  One of the top comments was how almost all beginners seemed to think that spending 3 hours in the gym would get them results, but that the truth was what matters more is the quality, not length of your workout. A part of the comment that stuck with me was, “It doesn’t matter if you work out for 1 hour or 10 hours; what matters is who has the higher quality workout.  If you’re going to do something (weightlifting), at least do it right.”

With my new found knowledge, the efficiency and quality of my workout increased and became worthwhile.  I spent less time in the gym, but the time I spent was much more effectively used.  I didn’t half ass my exercises; I gave it my all on every set and every rep.  I made sure that when I finished my set, I had nothing left in the tank.  With these new techniques, I was able to make much more progress in 1 month than I was in 3 months.  I was able to make progress in less time, because I used my time efficiently.

I cannot tell a lie; I have gotten lazy.  As much as a I preach hard work in all my posts, I must confess that I have been lazy. 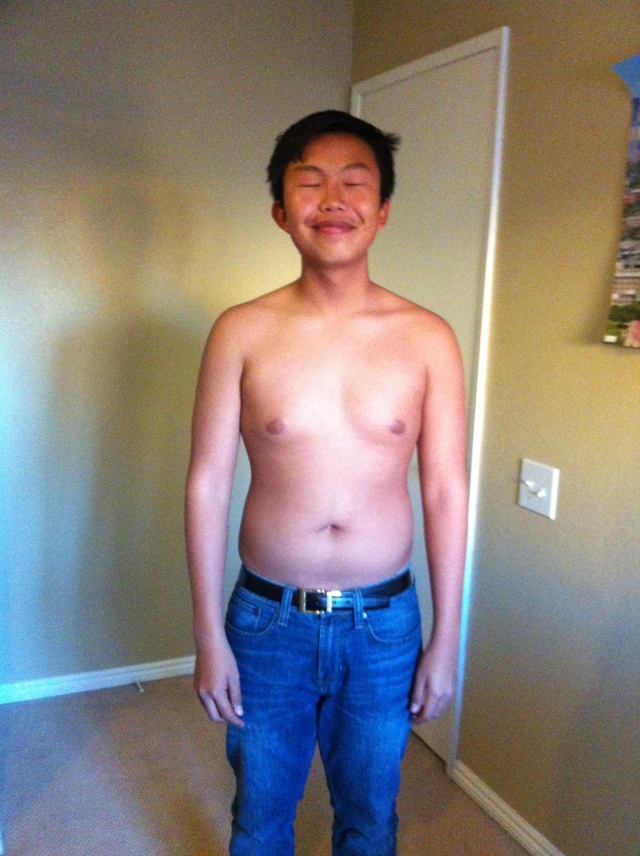 As you can see, I haven’t made much progress…

Ever since the beginning of the year started, I started to suffer from lack of motivation.  I’m not sure why this is happening, especially since I made a bet with Andy.  The bet was who could get the better body in four months and as of right now I am definitely on track to lose the bet because of my aforementioned loss of motivation.  I have been pondering the loss of my motivation, and have narrowed it down to two reasons.

The first reason is that I don’t worry too much about girls anymore.  Before, I really cared about girls and  how to get them.  I thought that the best way to do this was just by getting a great body.  After all, when was the last time you heard of a girl who didn’t like a six pack or biceps?  However I recently have learned that a great body is not actually essential to getting girls!  Who would’ve known?  Apparently all you need is confidence.

The second reason why I’ve been struggling is that I’ve been distracted by senior activities.  In one of my previous blogs, I mentioned that there will always be distractions that encourage laziness, and this phenomenon has happened to me.  Whenever I feel like working out, I end up choosing to hang out with friends.  Whatever the reason, there is always time to avoid exercising.

Recently, ultimate frisbee was introduced into my life.  I’m naturally not good at sports, so I’ve had to work harder than others to succeed.  This has become a catalyst for my return to the weight room, as I have to lift now, not to get girls, but to be better at sports.  I believe that this will be a much better motivation for me, and will lead to greater gains.

Fear is prevalent around us and always has been since the beginning of our lives.  Taking our first step, going to the first day of Kindergarten and leaving our parents behind, and being potty trained are some of the toughest moments we’ll experience early in our life.

When people look to change their lifestyle and habits, they are scared to do so.  Most people are comfortable, albeit not satisfied, with what their current lifestyle is.  They’re afraid to jump out of their comfort zone in order to improve the quality of their lives.  They’re afraid to take the first step in the process to improve their health and quality of life.  Whether it’s the fear of being judged for eating chicken and broccoli in a tupperware or being laughed at for lifting lightweights and running on a treadmill, the fear consumes over the person and prevents them from taking the steps needed to achieve their goals.

If you really want to accomplish your goals, you have to overcome your fears and realize that fears are meant to be conquered, not avoided.  Taking the first step may seem the hardest, but after taking the first step, the next steps will feel easier and easier.  Eventually, leading a quality and healthy lifestyle will seem like nature to you; it won’t be a fear, but moreso, comfort.

One of the underlying themes of the Heart of Darkness is that humans are innately evil.  There are many arguments that point to humans being innately good too, but at the end of the day, the topic still is open ended.  In terms of fitness though, I believe that we are definitely “evil”.

The easiest thing to do when working out is to not work out at all.  We as humans are always incline to choose the path which will offer us the most comfort.  Exercising definitely does not mean comfort.  In fact, it usually means the opposite, as we have to exert ourselves to achieve what we want.   What further worsens the situation for us young people is that we fail to realize the long term implications of what we do today.  So, instead of going out and exercising or doing other things, we choose instead to stay home and surf the internet.  Even as we travel upstream in time, it gets more and more difficult to escape the heart of laziness.  More responsibilities are constantly being added on, and fitness quickly takes a backseat to what may seem like more important things in life.

If  we compare the Heart of Darkness to fitness, then laziness is definitely the “evil” in the book and we are all Marlows, believing that we can beat it but inevitably giving in.  In the same vein of thinking, the best way to be saved is for us to have someone looking our for us, just like Marlow was looking out for Kurtz.  Finally, if we are totally consumed by this laziness, then we will end up like just Kurtz, except fatter.

What is truly the heart of darkness

Now that all the facts are laid out, it’s time for you to decide what you want to do with your body.

If you want a body that will get all the ladies… work on getting ripped.

If you want to be able to lift heavy objects… work on getting big.

If you want to to do both… then do both.

At the end of the day though, do something, rather than just sitting around.

Going to the gym and enjoying the scenery, chatting it up with a few friends and making small talk is fun and all, but remember, you came here on a mission, to accomplish your goals.

The only way to accomplish these goals is to keep focus on the task at hand, and not only keep focus on your task, but to finish your task with all your will.

Getting sidetracked with conversation, or anything in general, isn’t going to help you accomplish your goals.  It’s going to prevent you from reaching and realizing your goals.  It takes up valuable time that could be used to lift weights.  It takes up energy that could be used to do an extra 15 minutes of cardio.  It makes you lazy and prolongs your workout, and in turn, might encourage you to NOT finish your workout.

Keeping focus on your task makes it much more efficient.  You can accomplish much more and in much less time.  It’s like reading a book in English; if you focus on the book instead of procrastinating on it and reading a few pages at a time, you get a much better understanding of the book, and a much better experience from reading it in a much shorter amount of time.

In the latest installment of my series, I will be covering the aspect that I believe is the most essential to becoming being ripped or being big: the diet.  Often times, this is the part that most people will fail in even in their normal routines to lose weights.  Diet will the deciding factor in whether you achieve your goals or not so naturally, it is the hardest part of the plan to follow.

There are two ways to diet to get big.  The first way is simple, but will take a toll on how your body looks.  It’s simple; eat, eat, eat, and when you feel full, keep eating more.  See, being big requires that people pack on more muscle mass.  What’s the only way to do this?  By providing your body with more material to create this mass.  There are no restrictions on diet, as the goal is just to pack on as many calories as possible.  The other way to do this will still create body mass, but will make you look a lot less fat.  The idea is the same, to eat as much calories as possible, except to get calories from healthier sources.  That means that you will eating a lot of chicken, while cutting out the hamburgers.  This method is a lot harder to follow, but will produce better results in terms of achieving a more aesthetic body.

I find that this image holds true for a bulking diet

I’m not going to lie, dieting to get a shredded body is one of the hardest things to do in fitness.  Not only will there be a huge reduction in calories, but these calories will also have to come from healthy sources.  There are many ways to do this, but I have found the most success with a diet called paleo.  This diet calls for people to eat like the cavemen once did, only natural foods that are not processed.  I followed this diet for three months, and I was able to look visibly more cut despite maintaining the same weight, which is what diets for shredded bodies should aim for.

The paleo diet is popular in the crossfit program, and also among military personel.

At the heart of both these diets is the same idea; eat healthier.  The main difference is how much food to consume in each diet.  These diets should weigh heavily as you consider what route you wanna take, especially since diet is considered to be the most important part of having a great body.

If It Fits Your Mind
Blog at WordPress.com.